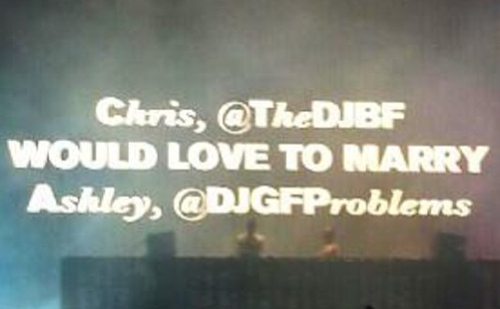 In the days after the cancellation of Electric Zoo 2013 discussions centralized around the tragedies of the two deceased patrons where media outlets flocked like moths to the funeral pyre of EDM’s public reputation, shedding a dark light on the industry and vastly overlooking some positive outcomes of festivals like Electric Zoo.

I’m here to report on one such positive outcome largely overlooked by the mainstream media.

Amid a sea of more than 110,000 people, two individuals shared a unique moment they will remember for the rest of their lives. Known on Twitter as ‘DJ Boyfriend’ and ‘DJ Girlfriend’, Chris and Ashley have been lovers of music ever since they met at the State College of New York’s Albany campus. Ever since their first date at Webster Hall, the pair felt a strong connection to dance music, and felt a strong connection to their fellow patrons who they affectionately refer to as their ‘family’.

‘EDM is one of our biggest passions. Dance music isn’t just about the music to us. It’s about being in that environment, meeting some of the greatest people we have ever known. Music is the one output that let’s us be free. There isn’t any judging or the feeling of being uncomfortable. The second the music starts we know we’re at home’ – Chris aka @TheDJBF

Sharing such a strong passion for the scene, Chris decided he wanted to take their relationship to the next level and bring their friends and music-loving family along for the ride.Having previous declared his love at other events, Chris wanted to solidify their relationship and reached out to a close friend.

‘I honestly didn’t even really think about EZoo until a close friend of ours had won their trip to Vegas for a weekend to hang out with A&B. When she got back I figured since A&B is one of our favorite groups it was only right that I give it a shot and see what would happen. I asked her if there was anyway she could get in contact with them and see if they would help me.’ — Chris, @THEDJBF

As luck would have it the Above & Beyond team responded enthusiastically, offering to help.

‘That day I couldn’t stop smiling. I was literally a bubbly mess. I remember Ashley commenting on my happiness that day – I had to play it off while texting my closest friends first telling them that it was going to happen. After that I messaged our entire rave family online to let them know it was going down and that we all had to meet before the show’

After confirming the plan and details with the management team of Above & Beyond, Chris surprised Ashley with a truly unique statement of his love in front of a packed crowd at this year’s Electric Zoo festival:

‘It wasn’t till the day of the show that they messaged me “All set!!! A Thing Called Love around 8:30 look out for the screen! Let us know how it goes!!! Even though we know she’ll say yes!!” . I was so happy – I kept pulling people aside and telling them when it would happen. Finally when the show came we met up with a mob of our friends. Ashley just thought it was because we all loved Above and Beyond. I led everyone into the crowd — I was able to get to the exact spot she first seen Above and Beyond in’ — Chris, @TheDJBF

‘When I first saw the message on the screen I couldn’t even move. I was in such shock. When I turned to my side and saw that my rave fam created a giant circle around Chris while he was down on one knee the tears were immediate. I couldn’t believe how lucky I was to have my true love propose to me in such a spectacular way. I couldn’t even form words. I just nodded my head yes and wrapped my arms around him. I couldn’t believe he pulled off something so grand and so memorable.’ –Ashley, @DJgfproblems

I’m happy to report that Ashley did say ‘yes’, and the couple is excitedly planning their wedding. 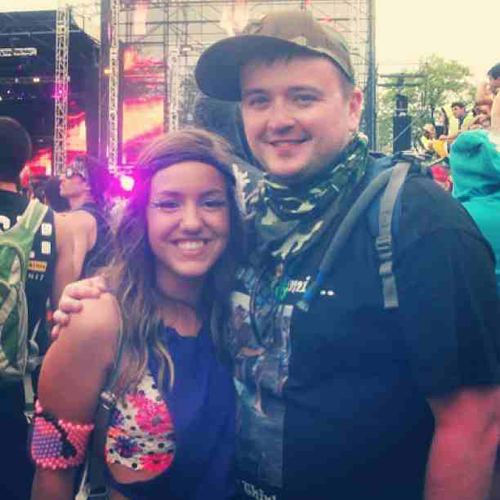 Though you will undoubtedly read article upon article demonizing EDM as a music for the drug masses, take comfort in the fact that “small moments like these” do exist in the festival space, and don’t forget about a thing called love.

Jochen and Markus finally collab to put out a great track, Rotunda. Released on Coldharbour Recordings May 2nd it has already reached #3 on…