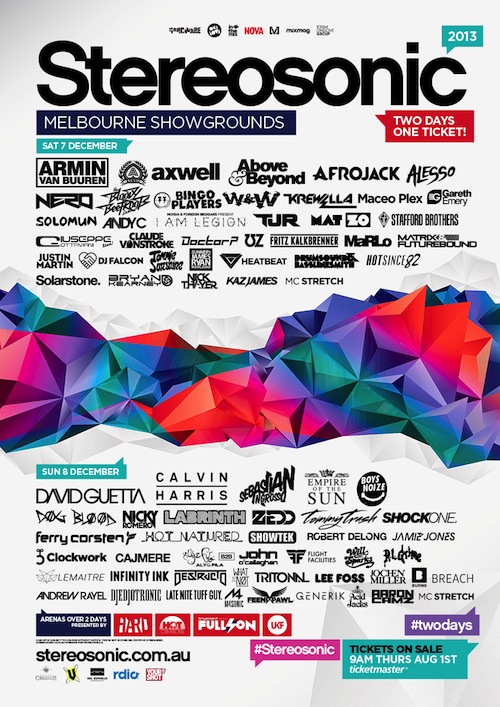 Stereosonic is one of the largest music event franchises within Australia. It’s “bloody epic” as the locals would say.

Perfectly placed in early December, Stereosonic is a festival that welcomes in the summer for music mad Australian sun worshippers (Yes, you read right, down under has summer in December, that’s a sausage on the BBQ for Christmas, let the mind boggle). Boasting some of the best festival line ups that electronic music can offer – it’s the southern hemisphere version of Electric Daisy Carnival. But bigger.

The event is so large in Australia – that it’s held over 2 weekends, in 5 different cities – Melbourne, Sydney, Perth, Adelaide & Brisbane. The logistics are fairly impressive with 2 festivals happening simultaneously. The line up is coordinated months in advance to facilitate transit and optimum set times; so every DJ is the right city, and the right festival, playing at the right time. This year, for the first time ever, the line up is so huge that the event will be split over two days or #twodays as the promotional material boasts.

It’s not just about the music – the event itself is an experience. The service is acceptable, the security good natured, and everyone has the classic down under summer vibe of just having a great time. Come to Australia, as this festival is bucket list worthy.

Interesting side note: Rumour has it, that the week between the weekends that the festival is on – the event organisers Totem One Love Group – lay down $100,000 in entertainment kitty cash to keep the DJ superstars having fun in their down time.

With the official release on Marco V’s In Charge Recordings coming March 17th, Carlo Calabro’s ‘Cereal Killer’ is huge. Calabro has been around for…