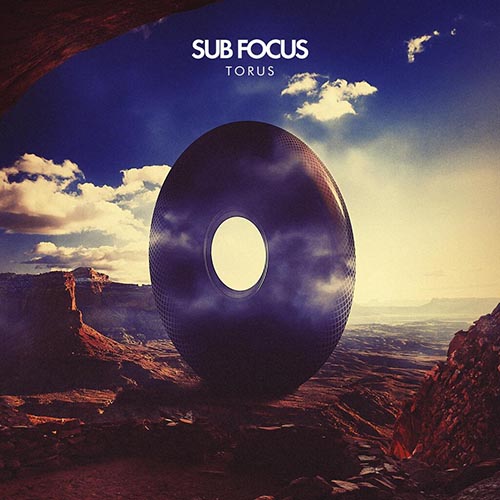 It’s been four years since Sub Focus released his debut album and now Nick Douwma returns with his second studio album ‘Torus’. The drum & bass specialist just might of just dropped one of the biggest releases in dance music this year. ‘Torus’ is absolutely massive, from the track production to vocals everything about this album feels huge. While our boy Avicii dropped another wildly popular gem last week with his studio debut, Sub Focus has quietly put together one of the most complete dance albums in 2013.

Sub Focus said he wanted to give the album a bit of ‘movie feeling’. The atmospheric effects that appear in nearly each track do just that. The first track, ‘Torus’, starts the album off with eerie radio transmissions and distorted sound effects to create the mood and build suspense. Shortly after listeners are hit with a salvo of drums & horns leading up to a heavy, and kind of dark bass line.

Despite being a pretty aggressive track to start a studio album Sub Focus didn’t forget about his drum & bass fans. The instant classic drum & bass track ‘Out The Blue’ is the second single off the album and features almost stadium rock vocals. ‘Out The Blue’ was followed by two more huge singles, ‘Tidal Wave’ and ‘Endorphins’. ‘Tidal Wave’ was featured on Skrillex’s BBC Radio 1 Essential Mix and ‘Endorphins’ popped up pretty much everywhere for it’s dramatic vocals delivered by Alex Clare. If Alex Clare’s voice sounds familiar it’s probably because you’ve heard his most popular song ‘Too Close’ a thousand times on the radio and TV.

The track ‘Out of Reach’ is another record where the vocals play a huge part in the track’s success. With it’s steel drums and indie sounding synths ‘Out of Reach’ is hard to put in a box so we’re not even going to try. Nick was not scared to try production outside of his drum & bass/drumstep comfort zone. ‘Close’ is a groovy deep house track while ‘Turn Back Time’ tiptoes the line between cheesy festival ‘banger’ and solid electrohouse .

‘Torus’ doesn’t feel like a weak attempt at making a studio dance album. Instead of filling the track listing with throw away collaborations all the features feel meaningful and work perfectly. The singles off ‘Torus’ satisfy the entry level ‘EDM’ listener and while still giving the hardcore fans something to enjoy. The album feels a lot like Nero’s last studio album ‘Welcome Reality’ and might be the best dance album in it’s category since then.

Sub Focus- Out The Blue