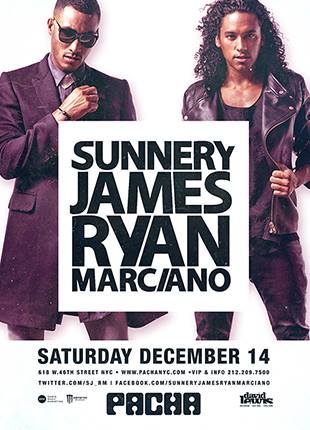 Sunnery James & Ryan Marciano are two of dance music’s most prosperous DJ duos in the game. The Dutchmen have concurred through the fade of DJ duos to hit the music world. And on Saturday December 14th, they return to one NYC’s hottest and most popular clubs, Pacha NYC. James & Marciano are both front men to the style that is taking the world by storm – back to back sets. Join us as they bring their two-man circus of Dutch rhythm and beats back to NYC.

Here’s an inside tip: Sunnery & Ryan are spinning till 3AM, but wait – the party isn’t over. Immediately after they’re followed by Late Nite with Pete Tong & Reboot. That’s right, the BBC man himself is also making an appearance! Pete Tong has been around since DJs first put needle to vinyl and is still regarded as one of the world’s best. Pete stops by on Saturday as well and brings along Reboot – a constantly evolving artist who has rocked Ibiza and has now come to do the same in NY.

It’s a night jammed-packed with superstar DJss – some might consider it a mini festival! So don’t miss out, get your tickets now and chime in on what promises to be an unforgettable night!

Get your tickets here.

Production team Miike Snow has been creating quite the stir in the dance music world with his new album. However even more compelling for…