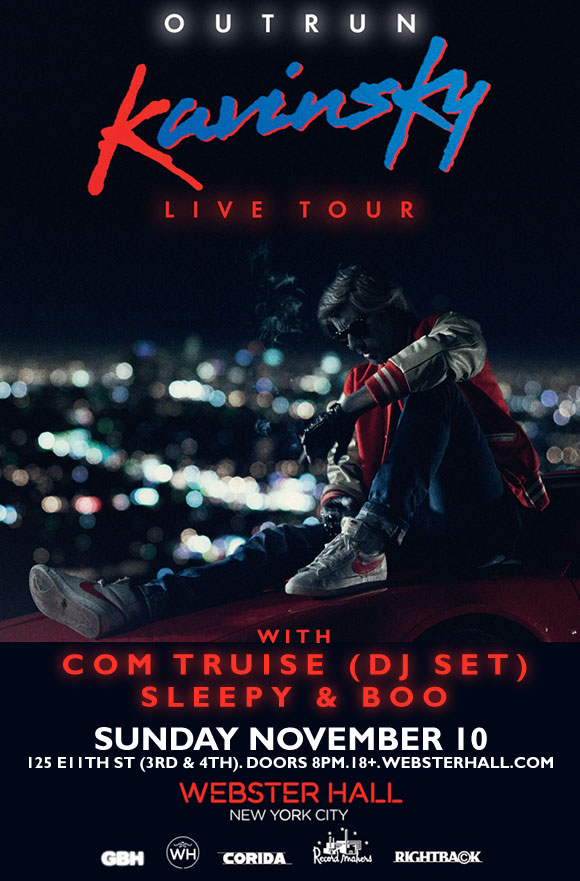 The French have been responsible for the upbringing of a number of talent musicians. Including the worldly celebrated duo known as Daft Punk. However Daft Punk are not the only ones of their kind. There is another French DJ, who’s sound is reminiscent to the sounds of Daft Punk. In fact he’s a close friend of Guy-Manuel de Homem-Christo and Thomas Bangalter. He’s even co produced tracks with the now idolized duo.

Who could we be referring to?
His name is Vincent Belorgey, also known as Kavinsky. You’ve surely heard his tracks in the past, he was responsible for the soundtrack to the film ‘Drive‘ with Ryan Gosling. What really sets Kavinsky apart from the majority of DJs is his musical concept. Kavinsky claimed that his music is inspired by thousands of movies he watched as a young boy and that he has cherry picked the best parts from them, consolidating them into one concept. The end result is the great soundings of 1980’s electro-pop.

You can catch Kavinsky this Sunday at Webster Hall for what is a promising performance.

This isn’t the Webster Hall your father and mother attended. Webster Hall has been redesigned and tricked out with a state of the art sound and lighting system which rivals that of Madison Square Garden. Proof of which can be found on Electronica Oasis Instagram account: ElectronicaOasis

Tickets for Kavinsky at Webster Hall this Sunday November 10th after the jump:
Purchase: TicketWeb

Reviving one of trance music’s all-time classics, Slusnik Luna’s ‘Sun 2011’ is a euphoric, respectful update of the Finnish outfit’s 2000 anthem. Signed when…