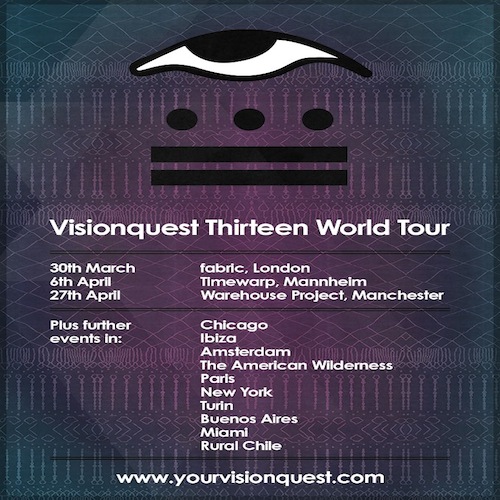 The highly-esteemed Visionquest have announced their global tour which kicks off with a bang at London’s reputable club, Fabric on March 30th. This will only be the beginning of their 13-date tour that is stated to use “innovative production concepts and cutting-edge technology” to create a unique experience for their audience. The collective of Ryan Crosson, Seth Troxler, Lee Curtiss, and Shaun Reeves were inspired by the passing of the Mayan Calendar and sought this as an opportunity “to get back together and do what they do best.” (As said by Lee Curtiss) Hitting all the major hot spots such as Chicago, New York, Ibiza, Miami, and “somewhere in the American Wilderness” – a hidden date that will be announced during WMC on March 22nd. Just announced today, this tour is already being hyped up all around the globe.

Don’t forget to tune in here at 4pm GMT for an exclusive Visionquest interview!

The English dubstep producer Christopher Mercer aka Rusko broke into the scene back in 2006. After graduating from Leeds College of Music, Rusko took…