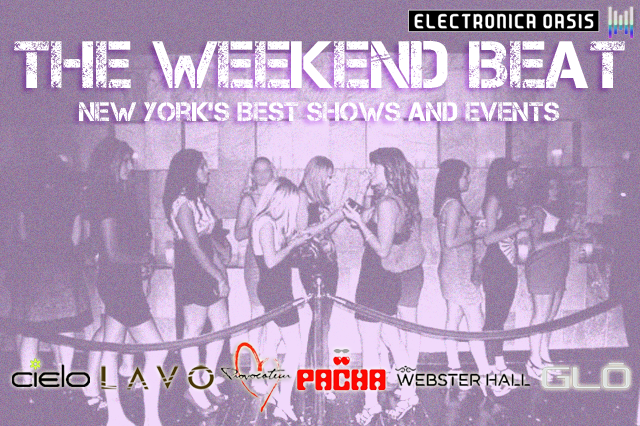 Oh em gee. We’re back from Miami and we still can barely open our eyes and walk straight. Read about our escapades here. More to come tonight. So, last week New York migrated south for Miami Music Week. Well, New York is back ten-fold. There are 29 events over the next seven days and a lot of money to be made. As you’ll see, DJs are spinning multiple sets this weekend. It’s a fair possibility to run into Laidback Luke, Martin Solveig or Tiesto this week. Star watch!

Amazingness after the jump. Big names coming to NYC soon. Click for more!

Where We’ll Be
Everything looks so good! Firstly, we will be announcing Dirty South’s secret show location right here at 4 p.m. We will have one member in attendance tonight. Thursday we will head underground for Bonobo. Usually we’d check out Tiesto too, but, God, we’re tired. Friday we will be at Mord Fustang. We’ve been anticipating this show for months now. With his new EP and his Plasmapool backing, it is sure to be one of the premiere shows this weekend. Tons of music you don’t normally hear live. Saturday we will be at home base for the super show featuring el bee el and company. Pacha NYC is sure loading up nights, eh? Our recommendations include: Strip Steve at Le Bain, Filo & Peri at District 36, the Terminal 5 mega-show Saturday (that line up is absurd–but there was many complaints about the last Anomaly event, so we’ll see,) Tyler Sherritt at Santos, Laidback Luke at Glo (Glo!) and the indie groove of Metronomy over at the Irving Plaza.

Pacha NYC will kick off its Thursday series with Sean Tyas & Simon Patterson on April 5. They’ll continue with a trancey April line up. ATB will be there on April 13, Tritonal on April 19 and Marco V on April 26. On April 27 they’ll switch to a more traditional line up, Robbie Rivera along with Bassjackers and Peace Treaty.

Feed Me will be at Terminal 5 next Friday, April 6.

Gigamesh will be at Yotel on April 7.

Cielo will be taking a break from deep house on April 12 when they bring Deniz Koyu to the booth. Sander Kleinenberg will be there later in the month on April 26.

Starkillers will be at District 36 on April 13.

Paul Van Dyk will be at Mixx in New Jersey on April 14.

Every year the start of Fall means weekend after weekend of huge acts at Webster Hall. This Friday we’ve got two first timers coming…