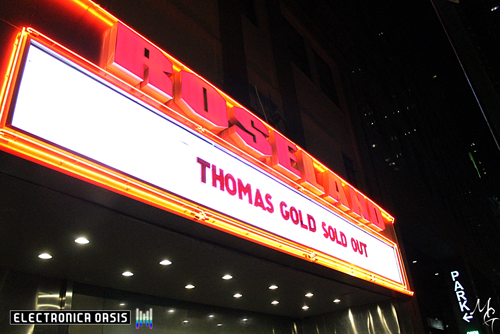 Thomas Gold loves New York. Saturday night proved that point once again. The show gained hyped up for weeks by Gold, Blogs and the like with constant tweets and Facebook updates about how vast a night it was going to be. Leading up to the night Gold held a press event at the Empire State building where photographers and writers flocked to get a firsthand account about the show and his current career (and braved the frigid temperature). The event was sold out for a couple of weeks, with more than 2,000 tickets bought. If anyone remembers last time Gold was in New York for Electric Zoo and Governors Island, you know how hard he brings it and how much love he has for our city. Bringing his Fanfare tour to New York for the last leg on his North American tour, along with Gold’s one of a kind production craft, things were about to get a little crazy at Roseland Ballroom. Coming off the release of his hit track ‘Miao‘ and tweets about having some new tracks to play for the crowd, we were excited to see what kind of set Gold had in store for the city that never sleeps. He announced opening acts a week earlier including Feenixpawl, Carl Louis and Martin Danielle, and Nari & Milani. Each DJ had an hour to two-hour sets, leading up to Gold finishing out the night playing well into the morning hours to a crowd who wasn’t ready to ever leave. The crowd varied from young to older, packed in Roseland to share their love of EDM and dance the night away with Thomas Gold. 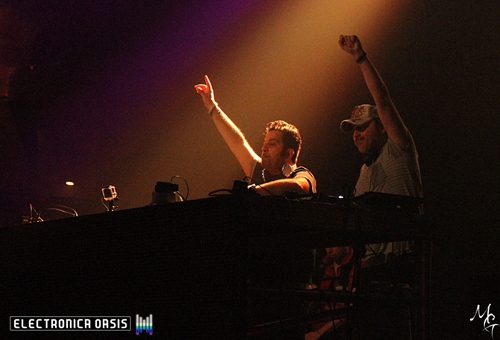 The opening acts set the stage for Gold in more ways than one, continuously hyping up the crowd with each DJ getting more and more intense. Feenixpawl took to the stage all the way from Australia, playing a variety of songs but their most well known ‘In My Mind’ brought the crowd to a frenzy. As the night went on last up before Gold was Maurizio Nari and Ronnie Milani, who again were nothing less than spectacular. An already insane crowd grew to new levels as performers graced the stage along with the DJ’s, the performers bringing the whole show to a new high. Maurizio Nari and Ronnie Milani played quite the varied set, everything from Avicii’s ‘Silhouettes’ and Linkin Park’s ‘Numb’, to their own hit ‘Atom’ they kept the crowd dancing.

The build up before Thomas Gold came on was one to remember, making Gold’s entrance even more impressive. Standing side stage Gold appeared to be ecstatic, smiling and laughing while a countdown video began behind the DJ set up on stage, a group of trumpeters introduced the beginning of the set. Gold sneakily crouched and ran onstage, by the time he got to his post confetti and smoke cannons shot off and his newest single “Miao” went off with a bang, literally. If the crowd was outrageous before this was something completely different, the feeling was tangible everyone couldn’t help but be enthused by his entrance. 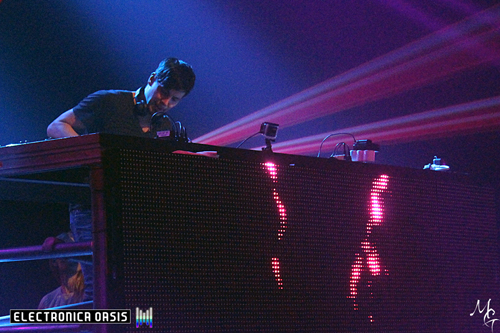 His variation of mixes and artists is one to beat, mixing songs such as REM’s ‘Losing My Relgion’ compared to Adele’s ‘Set Fire to the Rain’ he encompassed many generations of music. Of course there were songs such as his mix of Swedish House Mafia’s ‘Don’t You Worry Child’ which turned Roseland into one big sing-along, pausing more popular songs to let the crowd be the ones making the music which in turn gave off such a huge sense of unity. Hearing artists like Zedd and Avicii throughout the set just brought everything full circle, he was able to combine old school with current day music seamlessly.

As for stage presence, nothing could beat his enthusiasm and performers. The same dancers dressed like marching band girls gone bad that were in Maurizio Nari and Ronnie Milani’s set accompanied the beginning of his set. They stormed the stage spinning flags and twirling ribbons, they were another performance on their own and only added to the experience. But of course there was more, next was the dancers on stilts, yes stilts. These dancers gave off such an otherworldly feel, making the experience and music so much more striking. As his performance continued the confetti and smoke appeared again, along with at least twenty extremely large red and white balloons cascaded down from the mezzanine section, which stayed with the crowd for the rest of the night. His crowd interaction was beyond impressive, whether it was from the balloons or the inflatable trumpets and saxophones that were passed out during his set. To end it all his notorious drum-line took the stage as a closing act, leaving the crowd in a daze.

Not one person from the show seemed displeased, the crowd was engaged, the DJ’s were impassioned, and everyone left thankful for being able to share such an astounding experience.

This tydi track was an absoulte trance monster when it was released and Max Graham has added a nice touch to the original version….