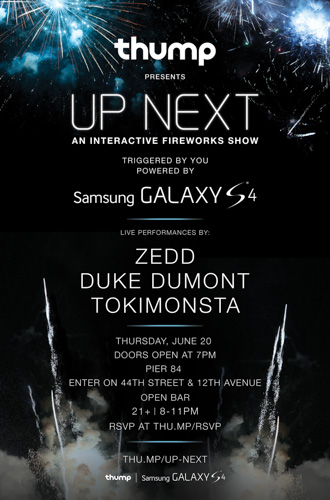 Thump is VICE’s new video channel for EDM and they have a stellar line-up this Thursday to celebrate the launch of Up Next, which is mysteriously described as “the destination for what’s next in dance music.” The three headliners will be performing in a special LED structure designed specifically for the show and a fireworks display will coordinate with the music for this unique, interactive event.

TOKiMONSTA comes from a hip hop background and her music hits the sweet spot between urban beats and hazy dub. Her new album, “Half Shadows,” was released on Ultra, after previous releases on Flying Lotus‘ Brainfeeder label, and ranges from dreamy soundscapes with atmospheric vocals to pop-tinged tracks that could move a dance floor.

Duke Dumont will add his retro house to the mix. His recent single “Need U (100%)” is filled with nostalgic musical references to the 90s and early 00s, but remains fresh enough to please contemporary listeners. His music thrives on feel-good vocals and underground beats.

Rounding out the night is Zedd, who has the headlines buzzing about his collaboration with Lady Gaga on her upcoming ARTPOP album. Whether that venture turns out an album leaning toward mainstream pop or EDM is yet to be seen, but it’s obvious that Zedd knows how to produce and perform to keep fans coming back for more. Given how hot Zedd is right now, it’s no surprise that the free event at Hudson River Park’s Pier 84 has reached RSVP capacity.

Luckily, you can still tune in to their site to watch a live stream!

Tri-State area producer Sevag shows off his versatility again in remixing Chris Brown and Sevyn Streeter’s ‘It Won’t Stop’. The original is a heart-felt…