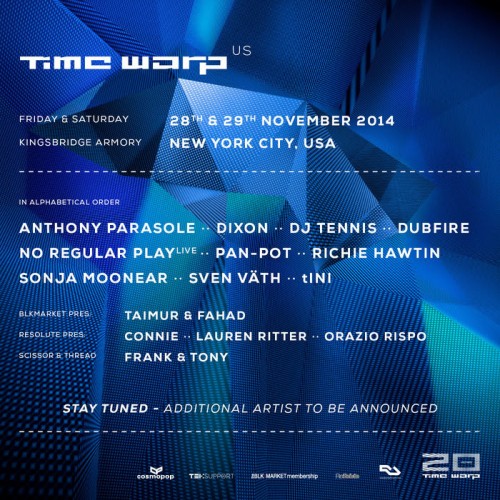 Time Warp, the long-running German techno institution, is bringing their festival to New York and the phase one line-up has been released!

Presale tickets are already sold out and general admission and VIP tickets are now available for this two-day event on Thanksgiving weekend. For Time Warp’s first foray into the US scene, they chose a very special venue, the Kingsbridge Armory in the Bronx, for a very unique dance music event. They picked this venue especially because of its non-commercial and underground atmosphere, which shows their dedication to the scene and the real music fans. We’re excited to see what they can turn this place into!

The line-up features heavyweight Richie Hawtin, who rarely makes appearances in the States, so we expect his set to be a massive highlight of the event. Also on the line-up are Dubfire and Pan-Pot, who have been all over the techno and festival scene recently.

Time Warp has partnered with locals BlkMarket, Resolute, and Scissor & Thread to present Taimur & Fahad and Frank & Tony, who spun a fantastic Vinyl Only set at Electric Zoo Festival this year.

Get ready to burn off that Thanksgiving feast with two days of outstanding techno! Oh, and this is only phase one of the line-up!

FEATURE: Stockholm to Sundsvall & Back: 15 Hours with Wayne & Woods

â€œThis is the reason why we have so many producers from Sweden,â€ Iman Gilani, known to his fans as Wayne, says with a boyish…