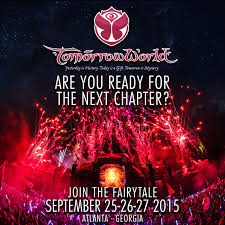 After an extremely successful first two years, TomorrowWorld is returning to Atlanta for its third. Mark your calenders off for September 25,26, and 27th and make sure you grab tickets as soon as they go on sale!

TomorrowWorld TV, TomorrowWorld’s live broadcast on YouTube, compiled millions of views throughout the festival from fans in over 150 countries. Fans from around the world also experienced TomorrowWorld Live on Snapchat, which captured unique viewpoints of festival goers. TomorrowWorld’s Facebook page has become a home base for ‘The People of Tomorrow’ and has now surpassed all other U.S. festivals with over 5.5 million likes. During TomorrowWorld, and in the week’s prior and after the festival, TomorrowWorld’s channels generated nearly 3 Billion potential media impressions.

Definitely stay tuned for the after movie!

Ã˜rjan Nilsen – Between the Rays

The Norwegian Orjan Nilsen has been active and producing music since around 2006, but he has become a really big name in the trance…