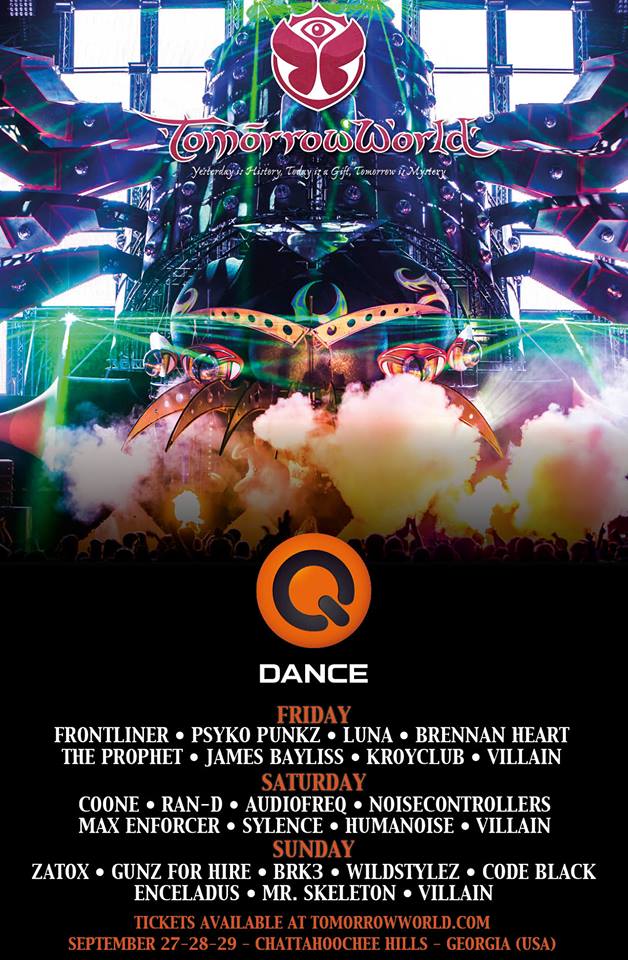 Q-dance has taken America by storm and, as promised, is back for their second North American event, TomorrowWold. Dedicated to delivering the harder styles in dance music, Q-dance has ignited a Hardstyle movement in the states. All those brave enough to give a live Hardstyle set a try, know the genre delivers an unmatchable level of energy and intensity for an incredible experience not meant for the faint hearted.

Hard dance is rapidly gaining popularity in America, reaffirmed by the lineup at this year’s EDC LV Basscon stage and the multiple upcoming Q-dance events; even Dash Berlin closed his sunrise set at this year’s EDC Vegas with DJ Isaac’s remix of ‘Til the Sky Falls Down.’ The Dutch company (also responsible for overseas events such as Defqon.1 and Q-Base) first landed on American soil for EDC Las Vegas 2012, where their presence was unavoidable; up and down the strip, LED displays and billboards announced Q-dance’s pervasion.

While TomorrowWorld will be Q-dance’s second North American event, it will most certainly not be their last. Already scheduled, Q-dance will be throwing The Sound of Q-dance in LA in October and announced that they will be hosting a stage at Mysteryland in May.

Featuring some of the best names in Hardstyle, TomorrowWorld’s Q-dance stage promises an unforgettable three days. The Prophet, scheduled to DJ that Friday, is one of the leading names of Hardstyle and owns one of the genre’s largest labels, Scantraxx. The majority of the artist on TomorrowWorld’s bill are either current Scantraxx/Scantraxx sub-label artists or former ones- Audiofreq, Frontliner, Gunz for Hire, MC Villain, Max Enforcer, Noisecontrollers, Ran-D, Wildstylez and Zatox.

Check out The Prophet’s Defqon.1 set for a taste of what’s in store:

After a last minute conflict inhibited Noisecontrollers from performing at EDC LV, their TomorrowWorld set has been much anticipated. Gunz For Hire is another noteworthy duo on the bill- a collaboration of Ran-D and Adaro, two big names of the genre.

Code Black is not part of the Scantraxx family but this Australian DJ combines euphoric melodies and vocals with harder beats to create a lively, full bodied sound.

Brennan Heart is another fan favorite, whose hit single with Wildstylez, ‘Lose My Mind,’ is heard frequently in Hardstyle sets. The track was released under his record label, Brennan Heart Music, that launched in 2012.

With only a month away, TomorrowWorld tickets are still available for purchase.

Two blondes release a remix package. What happens to it? It goes platinum (zing!) The golden haired Nervo sisters havenâ€™t gone platinum, yet, but…