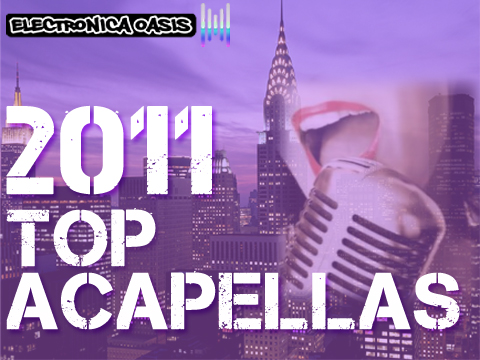 As we put the bow on our 2011 lists, we can’t forget about the remarkable voices who made some of the good 2011 releases great.

1. Adele – ‘Rolling In The Deep’ (Acapella) – Now, Adele isn’t an EDM star. Or is she? DJ’s picked up her ‘Rolling In The Deep’ acapella, the song in which she scares the bejesus out of men everywhere, all through 2011 and had their way with it. David Berrie started the trend with having one of the few officially licensed remixes, but many DJ’s would add it in their live sets (see. Nicky Romero.) Easy choice for No. 1 and, oh, yeah it’s available on YouTube.

2. Starkillers & Alex Kenji Feat. Nadia Ali – ‘Pressure’ (Vocals) – Perhaps the catchiest house-vocal of the year. Everyone sings along to ‘Come around, feel the sound. Boy you make my heart pound. Fill me up, bring me down. When I hear your sound.’ House music lovers know that Nadia Ali is one of the best in the business to have sing for you and after the ‘Pressure’ original mix came out, Alesso brought this song to a larger crowd (and even mainstream radio.) More recently, Tim Mason made, arguably, the best remix of it. ‘Pressure’ has enjoyed an incredible amount of success this year, and as Ali sang, ‘Everybody likes a view from above.’

3. Florence and the Machine – ‘You’ve Got The Love’ (Vocals) – The booming voice of Florence rivals that of Adele. ‘You’ve Got The Love’ was one of the most awe-inspiring, touching songs of the year. DJ’s picked this one up for remixes starting early in 2011. Mark Knight had a widely supported remix. UK-statinoed eSQUIRE had the best big room version and, somehow, this remix has over 4 millions views on YouTube.

Check out the rest after the jump!

4. Robyn – ‘Call Your Girlfriend’ (Vocals) – A staff favorite. These have to be some of the most diabolical lyrics you’ll ever hear. Seriously, Robyn is an emotionless home wrecker in this one. But, she nails it! Kaskade’s club mix is absolutely spectacular. An underrated 2011 release.

5. Skylar Grey – ‘Invisible’ (Vocals) – Another staff pick, this debuted at the end of the summer and told the story of a girl who just didn’t have the self confidence she wished she did. Perfect for many of our nations awkward youth. Dirty South’s production on the remix made for one of his many 2011 hits too.

6. Nero – ‘Promises’ (Vocals) – Of course our No. 8 song on the countdown had some of the best vocals of the year. The beautiful British voice is a staple in many live sets that don’t usually support dub step. They’re that good.

7. Empire Of The Sun – ‘We Are The People’/’Walking On A Dream’ (Acapellas) – Though the original songs are not from 2011 (2010 and 2009, respectively,) the two acapella have been used in countless live sets in 2011. It is a favorite of Quintino, Hardwell, Hard Rock Sofa and Fedde Le Grand.

9. Avicii – ‘Silhouettes’ (Vocals) – Now Avicii had a big year of music. As with ‘Levels‘ many DJ’s had the full version of ‘Silhouettes‘ before it was ever releaed. Avicii decided to re-tool his epic track. Originally Salem Al Fakir sung for Avicii, but now there is a new female-vocal version that Avicii plays live. The vocals in both versions are sung by uplifting voices and in Avicii-fashion are essential to the productions themselves.

10. Knife Party – ‘Internet Friends’ (Vocals) – The most absurd vocals of 2011. Hands down. ‘You blocked me on Facebook and now you’re going to die.’ A quick Twitter search will show the statements popularity. ‘Internet Friends’ is still gaining steam with the release of Knife Party’s latest EP, so expect this one not to go away for awhile. Also, you got to love ‘talking’ vocals.

Pierce Fulton is living the dream, pursuing an education at the University of Vermont, while also pursuing a little side gig as an internationally…