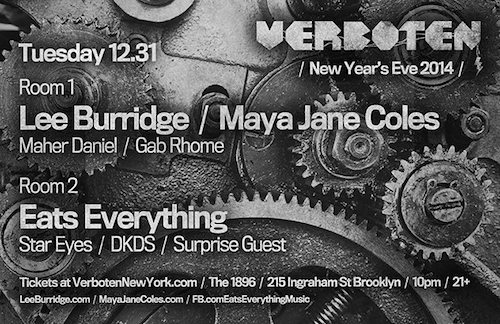 It was one of the coldest New Year’s Eves in recent years, but that didn’t deter us from heading out to Brooklyn to catch top tech house talent brought to you by, of course, Verboten.

The promotional company specializes in cultivating unique events around the city and bringing up-and-coming DJs out to play memorable nights. Although you won’t see their parties every week, when they do come around, they are well worth the wait. And wait we did, for an hour outside in the bitter cold before they opened the doors at 11pm. Given that the doors were supposed to open at ten, this was an unusual development, until someone came outside to thank us for waiting and announced that the police had paid a visit to the venue and we were all lucky to be there. The police in Brooklyn were on a roll that night, pulling the permit for Unicorn Meat’s Rusko show before it even started and shutting down DreamTime’s event after midnight. After hearing this news, we’re definitely thankful Verboten was spared.

Verboten chose to host their New Year’s Eve party at The 1896, the same site as their earlier Guy Gerber show on Thanksgiving Eve. The 1896 is a bare-bones industrial warehouse usually rented out for movie set and photo shoots, but it was completely transformed into a techno and house lovers’ paradise that night. The party was split into two rooms, a cavernous main room and a smaller room affectionately dubbed “the coatcheck room.” Considering the ticket prices were fairly reasonable for a New Year’s Eve party in New York, there was no open bar included, but the friendly bartenders kept guests happy with a full bar and plenty of Red Bull. The limited tickets left at the door were going for $150.

The warehouse thankfully did not reflect the chilling temperatures outside and heaters placed around the venue kept us from freezing, but once the place became packed just before midnight, the heaters weren’t even needed. Gab Rhome began with a perfect opening set, getting us ready for the midnight excitement. BBC Radio 1 darling Maya Jane Coles came on ten minutes before midnight and played back-to-back with Alex Arnout, a longtime supporter of Coles who released her first track in 2007. The connection between the two was apparent from our front-row view of the action through most of Coles’ set. There were cries from the crowd when she arrived, though none of the annoying fuss that surrounds hot name DJs. Coles came through the crowd to get behind the DJ booth along the wall like your average person. The first thing we noticed about her was her height. The girl is short, but packs a punch behind the decks. She began slowly, building the momentum through the countdown to 2014, when two canons rained confetti on the crowd and the disco ball sparkled, and continued into the first drop of the new year. With Coles working from a book of CDs, the two expertly shifted through tech house tracks, with Arnout taking the darker side and Coles bringing in soulful vocals during most of her transitions. Watching her work is hypnotic, she plays the various controls like an artist daintily painting a masterpiece, with very little crowd interaction except to flash an occasional smile at us.

Toward the end of her set, we moved away from the insanely packed main room to check out what was going on in the smaller room. Sound bleeding was not a huge issue for the most part, unless you were standing directly by the open door that connected the two rooms. At full volume, the simultaneous sets did not interfere with each other except when one set hit a soft spot and then the pounding bass in the other room became apparent. We caught the end of Star Eyes, a half hour before Eats Everything came on around 2am. The mood in the smaller room was more electro house, until Eats Everything brought a faster, heavier techno vibe to the delight of the crowd.

Although we weren’t able to stay until 8am, which is when we were told the show would end, Verboten definitely started our new year with a bang of techno bass and we’re looking forward to what they have in store for the rest of 2014. We know they’re just getting started.

Photos from the night are coming soon!