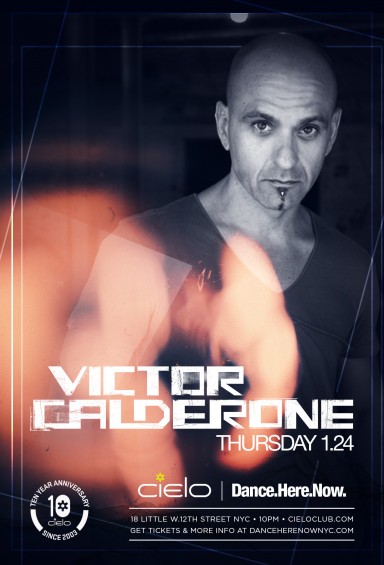 On January 10th New York City nightclub, Cielo, began celebrating their 10th anniversary with 3-weeks of appearances from some of the best DJs in the world. , Cielo has partnered with The Martinez Brothers, Wolf & Lamb vs Soul Clap, and many others. Although, there is an outlier on their long list of talented DJs, and that is New York City house/techno legend, Victor Calderone. Get tickets here

As previously stated, Victor Calderone is a legend; He has been running the New York City techno/house music game since the 1980’s(back when New York City was considered the Mecca of the industry). He has a resume of residencies that is longer than his set at Apocalypse, and he also happens to be good friends with Madonna. Now, Calderone is poised to man the decks of the club Beatport claims to have “the #1 soundsystem in America.”

Every night spent at Cielo is a night to remember. Every night spent listening to the tunes of Victor Calderone is a night to remember. Combine the two this Thursday, January 24, and the result can only be described using one word: legendary. With memories of New Year’s Eve fresh in our head, Calderone is returning to The City That Never Sleeps to remind us why he has reached that level.