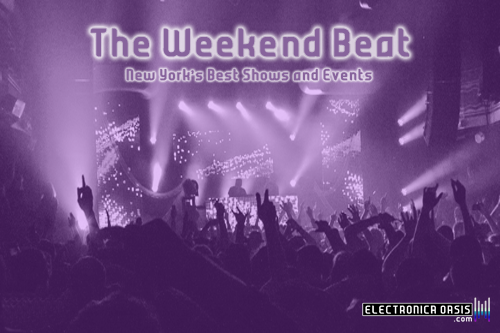 Welcome to a new kind of weekend beat – we’re bringing your attention to the best New York nightlife has to offer, from small-scale lounge nights to big room house. New York has a little bit of everything and we’re excited to bring you this new phase in nightlife!

Check out our picks for the best nightlife in NYC this weekend:

Pete Tong @ Output, Thursday
Pete Tong played a killer set in the circus-themed Sunday School tent at Electric Zoo Festival this year, so we would recommend his show based on that alone. But he’s also one of dance music’s greats and runs the BBC1 Essential Mix radio show, which features all the top DJs. Catch him at Output’s Input party along with Thomas Jack.
Advance Tickets

Planet Cognac presents Space Jesus @ Verboten, Thursday
This guy has to be seen to be believed. Spinning his own brand of bizarre transformational dubstep-esque music, he will take you on a magical journey to space and beyond. On Thursday night, he invades a venue normally shaking with techno beats to bring some chilled-out cool to your weekend, along with Esseks.
Advance Tickets

Erick Morillo @ Pacha NYC, Saturday
Come see the man who started it all at his home venue. Erick Morillo is a powerhouse of dance music culture, and he promises to play a ‘marathon’ set for us.
Advance Tickets

Escape Music Festival @ Governors Beach Club, Saturday & Sunday
This mixed-genre festival will be at Governors Beach Club as a last hurrah of summer, but it features plenty of electronic music talent as well. Check out locals Alex English, JDH & Dave P, and Sleepy & Boo, plus a closing set by Moby on Saturday night.
Advance Tickets

Porter Robinson @ Terminal 5, Saturday & Sunday
Porter Robinson released his follow up to ‘Spitfire’ this year and it’s been called a revolution in electronic music. ‘Worlds’ is an ethereal, dreamy album full of echoing soundscapes and soft vocals. Robinson is thrilled to present a new kind of stage show to go with his new sound, featuring spectacular lighting effects.
Advance Tickets

Alan Fitzpatrick @ The Wick, Sunday
The British techno DJ, with fresh releases on Drumcode, is on fire lately, putting in shows at Electric Zoo Festival and a subsequent legendary afterparty at Output with Joseph Capriati. If you’re clueless about where to be on Columbus Day weekend, check out intimate venue The Wick in Brooklyn for what promises to be a night of heavy techno hits.
Advance Tickets

Got a tip for the Weekend Beat? Email us at weekendbeat@electronicaoasis.com!

This past Wednesday, Best Buy Theater was treated to one of the the most exciting line-ups… well, ever. Bass Fueled Mischief, AEG, and Scion…