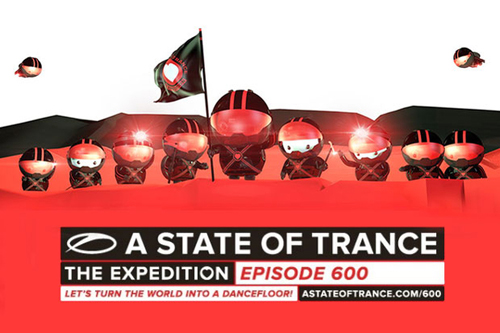 This weekend is another big moment for EDM – ASOT 600 will be taking place at none other then the monumental Madison Square Garden. ASOT600 will be a night filled with melodic trance tunes provided by W&W, Markus Shulz & Ferry Corsten as New World Punxx, Alex M.O.R.P.H., and of course – Armin Van Buuren. As promised, after parties will be thrown consisting of Markus Schulz & Ferry Corsten at Pacha NYC and Jochen Miller and W&W at Best Buy Theater! Buy tickets here!

A State of Trance radio has been a staple to trance legends, Armin Van Buuren, career since it started 13 years ago. The power of a radio show was always something that Armin appreciated and with that he sought out the opportunity to start his own massive weekly show. As years passed, ASOT’s fan base grew more and more creating a global wide community that would religiously tune in – as well as being the most live tuned in radio show on the Digitally Imported network. The beauty of ASOT is not only the way Armin pieces each show together, but the way he uses this show to showcase talents that he feels need to be given more attention. History shows that each ASOT tour is always magical addition as he handpicks monumental line-ups consisting of a powerful collective of trance DJs. Now, ASOT is coming to the mammoth MSG and bringing our favorites – Alex. M.o.r.p.h., Markus Shulz & Ferry Corsten (New World Punx), and W&W.

in 2010, Armin knighted Willem & Wardt as “rising stars in trance” and this past year has really show how right he and took them under the Armada wing – showcasing them at about every ASOT show. The Netherlands duo career really began when they produced the powerful ASOT550 anthem ‘Invasion’, which we couldn’t get enough of. With their high energy and connection, not only do they vibe perfectly with the crowd but really give a show that leaves you on the edge of your seat. Catch these two guys at one of their biggest shows yet!

Known to many as the darth vader of trance, M.O.R.P.H. is not someone to ever be missed. Taking the term of tech-trance and really cultivating it into his own sound – MSG dance floor has no idea what it is up against.

Two big icons coming together and having their monumental debut in NYC – how lucky are we! The two kahuna’s begin their big side project, New World Punx, a name that they came up with consisting of Corsten’s anthem ‘Punk’ and Schulz’s latest hit ‘New World’! Each with his own distinct style of DJing and music production, Corsten and Schulz create an utterly different world when they team up as New World Punx. The NWP sound is harder, more driving and more aggressive than the melodic, euphoric style of soaring trance. The New World Punx officially launch worldwide with their first three shows in North America: March 24th at Mansion in Miami, Florida and now in NYC!

Lastly, the man of the hour, minute, and second. Armin has a place in every trance fanatic hearts that just won’t ever leave. The thought of seeing Armin in a setting that is usually used for huge concerts is something that never really crossed our minds as a possibility. Knowing Armin, he definitely has something big, big, big up his sleeve for all of us this saturday!

What we want to hear

A small list of tracks we would want to lose our minds to on the MSG dance floor!

The Chainsmokers are quickly becoming the go-to duo for remix duties. After their highly successful remix of ASTR’s ‘Operate’, they hit us with a…