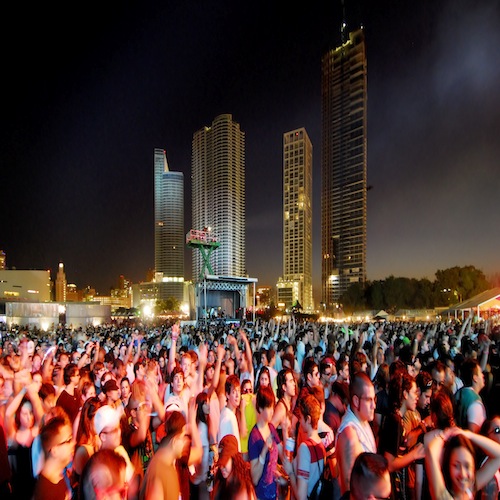 Every year around this time, Miami turns into the forefront of all things related to electronic music. With Ultra being two weekends – it is safe to say that WMC/MMW have really upped the ante this year. Bigger than ever, the parties that have been announced for the past following weeks will suit whatever floats your boat! Every DJ/producer around the globe will be travelling to Miami and playing more than once, guaranteed! Favorite DJ not on the Ultra line up? Don’t let your fomo get to you just yet, double-check the guide below!

For those savages who are beginning their WMC/MMW partying early..

The ever so popular mormon, Kaskade, is an act that all progressive house lovers would never pass up. So if that is your go-to-sound, you know this is a set you wouldn’t like to miss!

Visionquest member Ryan Crosson, My Favorite Robot, and Nitin come together to present a new showcase that is not one to be missed! What better way to start your weekend then grooving to some deep house on the Treehouse’s dance floor.

Calling all Anjuna lovers to the pool! With a packed line-up consisting of Mat Zo, Seven Lions, Beckwith, Norin & Rad, Andrew Bayer, Maor Levi & Jaytech – it is safe to say that you all are ready to reminisce on your Roseland Ballroom memories! So pick up your floaties and enjoy these Anjuna melodies, but this time under the hot Miami sun!

Ovum’s label head, Josh Wink, has curated a line-up that gives us two rooms to enjoy some heavy dance floor tunes! Creating the groove in the Friend’s room will be Cajmere, TEED, Azari & III, Chris Malinchak, and Kidnap Kid. Want a change of pace? Head over to Ovum’s room and catch (of course) Josh Wink, DJ Sneak or Manik – but don’t forget to keep your eyes peeled as they will be announcing a secret guest shortly!

Gather around for some Sunday funday as Diskolab presents us with a hefty line-up consisting of Michael Woods, David Tort, dBerrie and more friends!

What a proper sunday as this line-up proves to be hard to resist and guaranteed to be filled with fun, bouncy tech-house – Cadenza style! So, hurry up and get your tickets! It’s time to get your Luciano swirl on at Wall with Cadenza mates Reboot, Technasia, and Michael Cleis!

Let the unicorn slayer guide you down the rabbit hole – casually on a sunday! As said on twitter, Schulz has been hinting that this set will have similar vibes of his infamous Rabbit Hole NYE set. Buckle up and enjoy!

Two labels come together to showcase two rooms filled with mammoth line-ups. Dubfire curated his room to have heavy bass lines provided by the likes of Nick Curly, Carlo Lio, Mladen Tomic, The Junies, and Shaded. In the Supernature room will be Audiofly, Finnebassen, Livio & Roby, Alex Niggeman, and Ultrasone!

The collaborating of two labels into one party is always a treat – this showcase is absolutely no different! The trio that also goes by their label name, Apollonia, will be playing a set as well as a exclusive Flying Lotus set (Chris Carrier & Hector Morales). Queen bee of Mobilee, Anja Schneider, will be headlining her room alongside with her label mates Sebo K and Ray Okapara.

The Schulz Music Group is giving us a night infused with dark tech-trance that will be provided by Coldharbour amigos KhoMha, Arnej, Mr. Pit, Grube & Hovsepian, and Kaeno!

Without a doubt, this pool party contains the most colossal and fun line-up yet! Joris Voorn and Nic Fanciulli are bringing all their friends – pairing them up to each do b2b sets. Sun beaming on your face with a pool to cool you off, it doesn’t get better than this.

This Is Day/Night @ Delano

Now reaching it’s 8th consecutive year – Sander Kleinenberg’s “This Is” showcase continues it’s reign at Delano’s beach club! Alongside Sander will be Kraak & Smaak, Hot Since 82, Cassian, NSFW, Kraver, and Dave Sol. Warning: this is a 14-hour event so make sure you’re ready to commit to the dance floor!

Angello’s label has set up quite the extravaganza at Nikki beach with a stacked line-up consisting of Sander Van Doorn, Showtek, Hook N Sling, Leon Bolier and more!

Link & Rebels have come together to present us the “Sound of Detroit” and it couldn’t ome with a better line-up! Showcasing innovating DJ’s that have been in the game for years and years such as Stacey Pullen, Carl Craig, Kevin Saunderson, Radio Slave, Paul Woolford and way more.

The return of DJ Mag’s famous pool party has an eclectic line-up that will make your jaw agape. From having veterans such as Dennis Ferrer to Nic Fanciulli, and new upcoming all-stars like Dusky! Note: keep an eye out as they will be announce a very *SPECIAL* guest as well!

Okay, there are no words to express how monumental this marathon set will be. The last 3 years have said to be one of the best parties to ever hit WMC. Two underground vikings battling till the wee hours of the morning – this is a party no one should ever miss. Starting at 11pm and ending at 4pm the next following day, this show is not for the faint of heart.

Masters At Work at Sea! on Lady Windridge

Legends Kenny Dope & Louie Vega come together as their well-known moniker Masters At Work and take you along for a cruise. Since their big debut back at the massive BPM festival – this yacht cruise will be a historical event and worth every penny!

Fiending a night filled endowed with dark techno? Join Octopus’ boss man Sian for a night provided with heavy bass lines that will keep you moving. Joined by him are NYC’s own Boris, Stefano Noferini, Stacey Pullen, and Marco Bailey.

Fancy burgers and bass lines? Well, then buy your ticket and celebrate the 11th anniversary with the fun gang. As well as special guests – De La Soul!

Drumcode is a staple techno label that is loved throughout the dance music community. Joined by heavy-hitters like the infamous couple Adam & Ida, Joseph Capriati, Nicole Moudaber, Alan Fitzpatrick, and Joel Mull.

No Sugar Added strikes again! A two-day beach festival – what more could you ask for? Although, on this specific day Marco Carola’s Music on and Defected in the house will be showcasing the tunes for the day.

Another pool party, another stacked line-up.

Prydz is set to take on the terrace with upcoming star, Fehrplay. Providing the after hours tunes will be englishmen Pete Tong, as well as a b2b set from Joris Voorn and Nic Fanciulli.

Sasha’s Never Say Never party series are a staple to his career and have proven to always be memorable. This time Chicago’s Wavefront Festival is pairing up with Sasha and bringing a massive line-up with him. These special guests include Adam Beyer, Dusky, Guy Gerber, Lee Curtiss, and Thugfucker.

Hotflush’s head honcho, Scuba, curates a line-up that will intrigue all dance music fans. Taking over Pickle with him will be Dusky, George Fitzgerald, South London Ordance and one more. The highlight of the evening – Cirez D! Not to mention, another special surprise guest!

Solarstone curates a line-up with the perfect title. A night filled with the purest melodies provided by Guiseppe Ottavani, John 00 Fleming, and Kristina Sky.

With a recent announce duo side project entitles New World Punx, this night will only be a foreshadow of what these two will bring into the trance world.

Story graces trance addicts with a 4-hour Armin set that is sure to rattle the nightclub.

So, there you have it – my picks on the parties you should attend to this year in Miami!