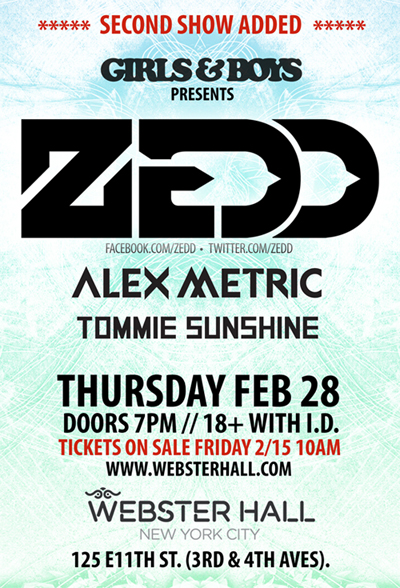 Featuring the hit single, Clarity, Zedd’s first full length album skyrocketed to the top of music charts everywhere within the first month after it dropped. Now, MTV’s Artist to watch in 2013 is playing 2 nights in NYC’s Webster hall. After his performance on Fri. March 1st sold out, Webster added a second performance on Thursday, February 28th. Known for his crunchy bass and his catchy melodies, Zedd is sure to play an unforgettable show. With Alex Metric opening, and New York heavy hitter Tommie Sunshine closing, 11th street will be rocking all night. The Friday night show is sold out, but tickets for Thursday night are still available here. Get ‘em while you still can.