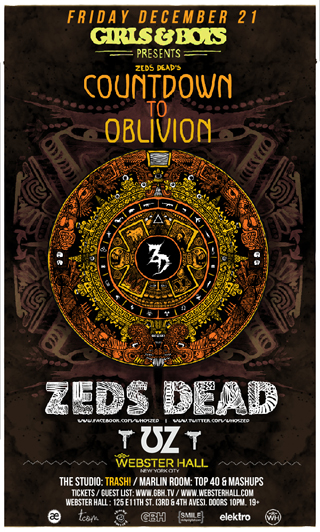 December 21st, 2012 the world was supposed to end. Why not end it with Zeds Dead’s Countdown to Oblivion at Webster Hall hosted by Girls and Boys. This end of the world celebration was a basshead’s playground. Zeds Dead, a Canadian duo made up of DC and Hooks from Toronto, Ontario, definitely planned on going out with a bang, feeding the crowd a perfect amount of bass to end the world. This sold out event was packed from wall to wall with bassheads fiending for their last fix. UZ threw down an amazing set which hyped up the crowd for Zeds Dead and Subset, who is the main DJ for every ‘Bassment Saturday’s’ held in The Studio at Webster Hall, kept the crowd going after Zeds Dead left. He’s known for dropping a lot of dubstep, trap, and anything with a lot of bass, perfect for a Zeds Dead show.

This was possibly the best 2012 show at Webster Hall. The dance floor was packed with people that were crowd surfing and throwing water everywhere and clearing embracing the end of world vibe.

UZ threw down some great beats like his remix of Foreign Beggars, ‘Goon Bags,’ along with an entire set of trap music which was perfect for amping up the anxious crowd. According to Diplo, ‘UZ tunes are drunken energy sub bass and cartoon horn stabs that make my stomach feel weird and my feet shuffle,’ which described UZ set perfectly.

When the music stopped after UZ, the crowd started shuffling all around building up the anticipation for what was about to happen. After about 5 minutes of waiting, DC and Hooks stepped onto the stage. An incredible energy and continuous yelling filled the entire venue and thats when faces started melting. The entire set was filled with ups and downs from heavy bass lines to melodic vocals and of course the up beat drum and bass from all of their amazing songs and remixes. This kept the crowd going the entire night. The vocals and deep bass slowed down the dancing and seemingly acted as an energy booster to recharge the crowd for the next up beat rage, a perfect balance.

When they dropped ‘Wild Heart’ the crowd went crazier than ever. This well known song made everyone jump and belch out the lyrics, even the guys. Ruckus The Jam also amped up the crowd. The entire crowd yelled “Bring That Beat Back” right before the drop, creating a mob of dubsteppers. Along with these two tracks, they also dropped their remix of ‘Paradise Circus’ by Massive Attack, which is rare to hear live.

All night the crowded room did not skip a beat. Mosh pits were formed in the center of the dance floor several times. The energy was higher than many shows held at Webster Hall, not to mention the amount of people there. Everyone was happier than ever just enjoying the moment as if it was the end of the world. After finishing up their last song, the crowd immediately started chanting ‘One More Song’ forcing them back onto the stage. They played their remix of ‘Lies’ by Marina and the Diamonds which was most definitely the best song to end their performance. The melodic vocals and heavy, slow bass blew everyones minds.

The entire set was very similar to their new Holiday Mix.

Subset, also known as Mark Martinez took the stage after Zeds Dead. We all know that it’s hard to keep a crowd hyped up at 4 in the morning, especially after the main act has finished but Subset dropped the craziest tracks one after the other. He made sure to drop heavy bass and popular tracks to keep the crowd’s interest.

12th Planet is well known for his skilled production of dubstep. Outstanding representations of this prowess are 12th Planet’s collaboration with Antiserum for ‘Bass…