This years Pacha Anniversary has been nothing short of spectacular hosting the world’s best DJs each week. So far we’ve seen: Tiesto, Loco Dice, Saturday’s ‘Super-show‘ with Adrian Lux, Hardwell, Martin Solveig and Quintino. Now Celebration #4 with Deniz Koyu and Fedde Le Grand is officially in the books. Fedde has been on his ‘North America Takeover‘ Tour starting just a few days ago on the 7th in Ann Arbor, Michigan. Hurricane Fedde is on a one way path of electronic destruction having not one cent of mercy. I’m always finding myself in the presence of Fedde Le Grand whenever he is in New York. His infamous live DJ skills and tasteful choices in tracks, picking them on the spot is an incredible thing to witness. All I can say was hearing the floor shaking to ‘So Much Love‘ in the beginning of his set was one hint that the next day would be filled with ice packs, Advil and house music (In a good way). Read more about this review after the jump!

‘So Much Love,’ one of the many number 1 Beatport gems Fedde dropped throughout the night

As the night began, walking into the club hearing some extremely dark tech house, I felt like I was at the Sunday School tent in Ezoo all over again. I found myself walking into the presence of the brand new Flamingo Record’s prodigy, Deniz Koyu. His introduction set was absolutely stellar from start until Fedde Le Grand had come on. I am always a big critic when it comes to a DJ playing good tech house and I can assure you that Deniz dropped nothing but greatness. Deniz dropped a song I usually hear much later in the night, interestingly enough I guess the crowd was ready for that level. Dropping the heavy ‘Blow Up’ (Thomas Gold vs. Axwell Remix) the crowd had its warm up and was ready for the main event of the night.

Nothing but Tech House in the booth with Deniz Koyu

I love hearing Fedde perform live, he really captures the heart and soul of his audience by playing exactly what they want to hear. There was never a track he dropped throughout the night where I would think, ‘Wow did he really just drop that?’ The tracks that Fedde dropped had such a wide range of versatility that one moment; you could be jamming out to the funkiness of ‘Rockin’ High’ or ‘You’ve Got The Love,’ dancing your ass off to some electro bangers like the Autoerotique remix of ‘House Music’ or Â ‘Funky Shit’ by Firebeatz, then next you could be singing along to anthems like ‘Levels’ ‘The Island’ or ‘Calling.’ Fedde did not forget to include all of his most recent Beatport number one tracks in his set; ‘Paradise’ remix, ‘So Much Love,’ ‘Metrum’ (mixed with ‘We Are Your Friends) and ‘Autosave.’

The fantastic integration between savvy tech house and notable house anthems everyone enjoys was not the only thing that made his set so stellar. Fedde also dusted off some of his earlier 2010-2011 CDs bringing back tracks that many EDM fans totally forgot about. Tracks like, ‘Diamonds in the Sky’ by TV Rock, ‘Insomnia,’ ‘Walking on a Dream vs. Amplifier, ‘I’m Coming Home vs. On Off,’ ‘Knas,’ and many more. Fedde dropped tracks that had the entire club singing along, even David Guetta! Such as Funkerman’s remix of the always classic Red Hot Chili Pepper’s, ‘Otherside’ and a mash up with Aoki’s remix to ‘The Pursuit of Happiness.’ There were multiple times in the night where I heard ‘Fedde! Fedde! Fedde!’ chants, clearly showing the connection he made with the crowd. Despite my love for Tech House, some of my favorite electro tracks that Fedde had played was a remix of ‘Kernkraft 400’ by Zombie Nation and the brand new Dada Life banger, ‘Kick Out The Epic Motherfucker.’ Fedde may have played some awesome Tech House and big room anthems but he was merciless when it came to giving the crowd a taste of electro.

Rockin’ the crowd with ‘Diamonds in the Sky’ by TV Rock

‘The Island’ from the booth

‘Kick Out The Epic MotherFucker’

Overall, Fedde played one of the most versatile sets I have heard in a very long time. I always appreciated Fedde’s fantastic DJ skills and the connection he creates with the crowd. I was everywhere in the club throughout the night; in the booth, up in the Mezzanine, on the floor and all I can say was the spot to be was definitely on the floor. Feeling the love from everyone in the crowd while Fedde fed everyone track after track kept a great vibe throughout the entire night. I really have respect for him because rather than some DJs just eating up the attention, Fedde knew how to personally exhert himself through his use of amazing music choice. David Guetta made an appearance later in the evening and even he was wooed by Fedde’s passion. Once his set was ‘over’ Deniz had hit the decks once again. Watching the crowd and how much he enjoyed the night so far, it was clearly obvious that Fedde was nowhere ready to leave just yet joining Deniz in an encore set since the crowd loved it so much. Great set Fedde, thank you for a fantastic night and I hope you enjoyed the parliament I handed to you as a token of appreciation for killing it and proving why you’re one of my favorite DJs. Keep on keeping on man.

A few notable tracks from Fedde’s set (No particular order) 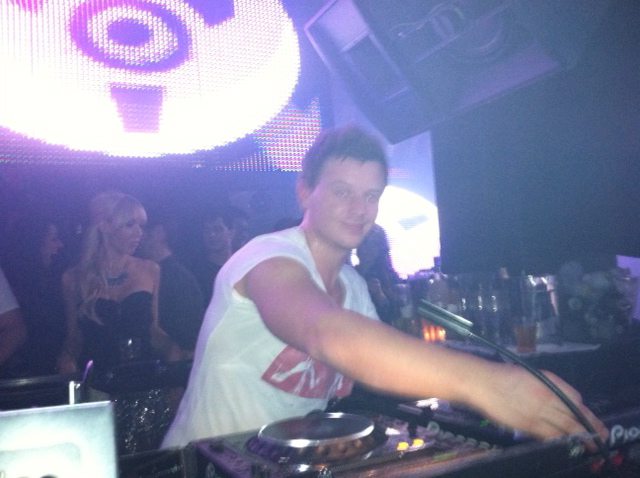 Don’t forget to check out our exclusive interview with Fedde HERE!