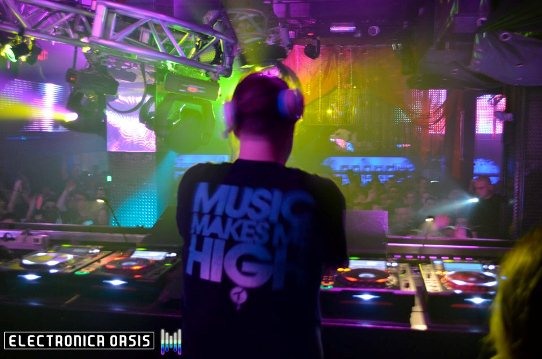 In what will heretofore be known as the President’s Day Massacre for all intents and purposes, Mutants Records founder and all around musical Renaissance man John DahlbÃ¤ck kept the crowd enthralled well into the wee hours during his set at Pacha last Friday. There is no other way to describe the absolutely murderous set that DahlbÃ¤ck wove together, which crossed genres and incorporated private edits and track IDs from across the electronic music spectrum.

2012 is thus far going swimmingly for DahlbÃ¤ck, who was recently honored by tastemaker Pete Tong at the beginning of the month when he named ‘Life‘ an Essential New Tune. His compilation on Toolroom Records also came out at the start of February, which features almost 40 musical goodies.

Sippingly sparingly on a bottle of water prior to his set, you would never know from his demeanor that DahlbÃ¤ck is a world famous DJ with more critically acclaimed tracks than you can shake a stick at. What is clear is that he loves crafting and playing music, detailing a necessary activity of his – studio producing and then testing new tracks live on his fans. DahlbÃ¤ck’s passion was palpable throughout his set, during which he displayed a Dalai Lama-esque concentration for two hours straight.


You have a musical background from your family, would you say that influenced your production career?
Yes – for them it was really important that I learned instruments. So I played piano, drums and guitar and they were listening to jazz and old soul and R&B and thatâ€™s how their style influenced me, because I wanted to do the same kind of melodic as jazz. So I guess they influenced me the most.

Tell us about how you came to found your own record label.
I wanted to have it as a home for my more experiential tracks and also the ability to sign new talents and release the music that I love, so itâ€™s a really powerful thing.

How do you decide what you want to release on Mutants?
I get a lot of demos – a lot of the stuff is just not quite there, and thatâ€™s me being nice. Music from friends of friends is often the way to go.

More videos and DahlbÃ¤ck insights after the jump!!
How do you balance between producing and DJing?
I donâ€™t know where I get it from, but Iâ€™m so organized in the studio, Iâ€™m there from 8-4 every day and then I play Friday, Saturday, come home Sunday and Iâ€™m back in the studio on Monday and thatâ€™s every week. So Iâ€™m just super freaky that way!

Would you say that you prefer touring or studio producing?
I like the combination, I like to create a track in the studio and then play it the weekend after. To get instant feedback like that is amazing. And so thatâ€™s what I do, I love to try things out, whether they are received badly or not, its really important to me to hear it live.

Would you say that youâ€™ve stayed away from producing hard electro, but that your production in the studio is now evolving?
The thing with me is, I change like once every month because I get so bored with producing just one sound. So for example last week before I came here, I produced a disco track, and two weeks before that I made a banging electro track. I like the blend of everything and when I DJ I also play everything, itâ€™s sort of a journey.

What would you say about your sometimes classification as an â€œunderrated artistâ€ even though you have been producing for a long time?
Some people like to, when they get a hit, they like to keep continuing that way, but I would get bored. I think that maybe I cross too many genres to actually you know focus and hit that one really hard, but it doesnâ€™t really matter I just want to make music that I appreciate myself. I donâ€™t want to get bored of the same piano melody or whatever.

Whatâ€™s your opinion on US versus European crowds?
The crowd in Europe starts to get really sort of bored compared to the US, because theyâ€™ve had superstar DJs coming for 10, 15 years, every weekend, even in the smallest cities. They bring them to a 4,000 person club and it will still be packed, and so 15 years later, no one goes there anymore. Theyâ€™ve become tired of it, whereas in the US itâ€™s still super interesting and everyone goes out.

Has there been any gig in the past year that you were really amped about?
I started going to the states 4 years ago, and it wasnâ€™t as good then obviously. I had a hard time building a career then

Anything that youâ€™re excited for in New York?
New York is my favorite city in the world. I usually stay in the Meatpacking District, and I love just walking around. People in the US, maybe not particularly in New York, are extremely friendly Swedes are not, in Sweden you could walk around a day with no one talking to you, but here it is impossible. Theyâ€™re friendly and social â€“ itâ€™s nice.

Out on Hardwell’s Revealed Recordings, Jewelz and Scott Sparks have teamed up with Quilla’s vocals to unleash a monster track ‘Unless We Forget’. We…