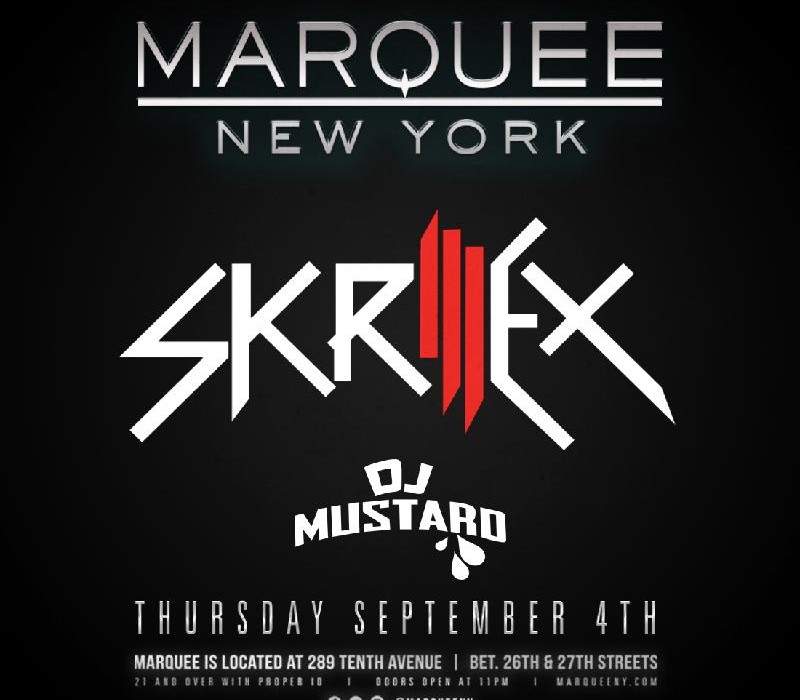 With Electric Zoo falling short of three days for the second year in a row, New York City was left wanting more. More bass, more lasers, and more beats. With Jack U scheduled to play last Sunday, the cancellation of the festivals third day also left New York City wanting more Skrillex. Skrillex is a man who needs no introduction; Even people who aren’t fans of his music know his sound, and could even recognize his face because of his distinct look. However, the general population doesn’t know that he is also one half of Dog Blood (who performed at EZoo last year), as well as one half of Jack U, who, as previously stated, was supposed to perform the Sunday of Electric Zoo this year. As a result of the cancellation, The City That Never Sleeps has had a thirst that could only be quenched by Sonny’s boisterous brostep.

Last Thursday at Marquee came and went quickly, and fortunately we arrived early enough to beat the line, and avoid long bar lines. When we first got there surprisingly the dance floor was empty, and the bar lines moved quickly, which made it easy to bust a move and then grab a much needed drink. Although, this didn’t last long, and no matter how many drinks were purchased, the thirst for Skrillex remained unquenched. At around 12:30am DJ Mustard came on, and throughout his set you could feel the dance floor gradually get filled. Mustard played an eclectic blend of hip-hop, and trap, which did a good job of warming up the crowd, however it also made the fans more anxious. With every 808 kick drum that rang through Marquee, the aggressive New Yorkers grew more and more impatient knowing that the 6-time Grammy winner wasn’t on stage yet, and that we might have to wait another song before he graced us with his presence.

At around 1:30am Mustard announced that it would be his last song. At this point the energy inside Marquee was contagious, and a slight hint of body odor filled the air, but that was no matter. As if on cue a pale, little man with the side of his head shaved, and thick glasses popped up behind the big-bodied DJ. Skrill manned the decks, and as always, took New York City on a 2-hour, bass-blasting, musical joy ride. He played his classics, like “Cinema” and his remix of Avicii’s “Levels.” He played a token rap song, which this time around was Warren G’s “Regulators”, and he played new music that is yet to be released, such as the new Jack U song “Take U There”, and his VIP mixes of “Devil’s Den”, and “Breakin’ A Sweat”. Where Skrillex is often undervalued is when it comes to his song selection of other peoples music. He dropped Diplo’s “Express Yourself”, which also gets the crowd going, but he also played an array of trap music that was just absolutely bonkers. At around 3:30am his set came to a close, but not before draining every drop of energy out of every last party-goer.

If you haven’t seen Skrillex, not only are you missing out, but you should really go see him as soon as possible. His energy, and enthusiasm is unmatched by any other DJ, and his music translates better over loud speakers than any producer. What is unfortunate is that it may be a while before the opportunity to see him at Marquee presents itself. Marquee has a great sound system, mind-blowing lights and lasers, and is the perfect, intimate venue to see one of your favorite artists. However, when Skrillex comes to New York he loves finding a new venue to perform that which only makes the mark he has left on the music industry that much larger.